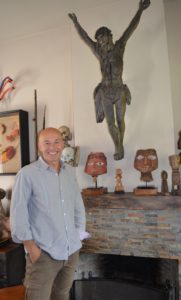 For 25 years, Steffen Patzwahl has been the zoological director of Pairi Daiza, a zoo, botanical garden and ethnographic museum rolled into one. The park is vast; you can easily while away a whole day there.
If you enter Pairi Daiza and visit the first toilet, the first thing you will realise is that it is a very unique park. The whole area is decorated with traditional money from all over the world, such as a feather roll of money from the Solomon Islands and a large money stone from Yap among many others. Because the toilets are somewhere everyone visits, Steffen wanted to turn them into something special. There is also a toilet in the aquarium, where you literally sit amongst the fish.

The park is located on the site of a 12th-century abbey and special abbey beer is still brewed there today. Work is currently underway on a first hotel-project and a new shelter for the polar bears. In the park, plants and animals are presented in their natural environment as much as possible. That’s why Steffen travelled to Canada, where he gained inspiration for the design of vast bear and wolf enclosures by visiting their natural habitat. He also enjoys working together with local specialists on the design of new living environments. On Vancouver Island, for example, totem poles were made for the park. And one of the temples from the Kingdom of Ganesha, made by craftsmen from Bali, has just been consecrated by 10 Balinese priests.

Steffen lives in the park and his passion for ethnography and the animal kingdom can be seen all over his house. A large albatross appears to be flying off from the ceiling, shields from Australia are visible in the alcove by the window and a collection of korwars adorns the mantelpiece. There are also axes and clubs from Oceania, a bowl with nose bones and other small ethnographic objects to admire. The table is full of books. Ever since he was a boy, he’s been interested in everything related to nature. The stones, feathers and bones that he found outside when he was a child came with him to the house. He was introduced to ethnography by an old collector from his village.

Steffen is mainly interested in objects from Oceania and South America. He has a large number of adorned and treated skulls. These skulls tell him something about how people deal with life and death in different cultures, something which he is also regularly confronted with in his work in the zoo. Between the skulls is an Asmat substitute head from Mata Hari’s collection. He also has a shrunken head, a so-called tsantsa, from the Jivaro tribes of Ecuador and Peru. The heads were trophies that were used during rituals. One of the other shrunken heads from Steffen’s collection was collected by the Marquis de Wavrin, a Belgian adventurer ,filmmaker and anthropologist who left for South America at the start of the 20th century and became very involved in the Jivaroan culture.

When Steffen started collecting, he sometimes bought objects whose authenticity he later started to doubt. But he sees this as the inevitable, almost like the dues you have to pay as a collector in order to gain knowledge and train your eye.
One of his favourite objects is a small korwar. The ancestral sculpture has an especially characterful expression and the wood glistens slightly if the sun catches it in a certain way. But he also has a personal connection with many other objects from his collection. He made a special purchase during a trip through Papua New Guinea, namely a bracelet made from a jaw, which he found in a supermarket. This had been left behind as payment for tobacco.

Last year, Steffen Patzwahl visited the Tribal Art Fair for the first time and was pleasantly surprised. He was impressed by the building, great atmosphere and very diverse range of objects on offer. It’s therefore very likely that he’ll be returning to the fair this year.