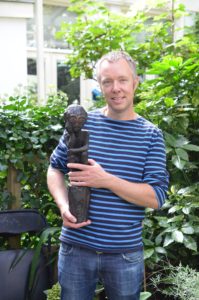 Folkert de Jong
I’m scared that I’ll get completely carried away buying tribal art, the threshold is low and the excitement high!!

Folkert de Jong is a visual artist. He was introduced to special objects at an early age because his parents used to collect them. The beauty of nature and handicraft was very important to them, which is why their house was full of items collected from nature, such as stones, driftwood, but also wood carvings and ceramics. His childhood memories are full of stories his parents would tell relating to each object. That certainly influenced his decision to surround himself with items that have stories attached to them. He gains positive energy from objects with a message or a meaning.

Folkert collects all sorts of things: tribal art from Borneo, Papua and Toraja, but also ceramics from Peru and two wonderful wooden sculptures from the Philippines. Recently, he started building up a collection of succulents. However, it is rather remarkable that, despite being a contemporary artist, his home mainly contains ancient art. Together with his wife, Delphine Courtillot, who is also a visual artist, he prefers old objects. “It’s as if via these objects, the past is still working its way through to the present and giving us a sense of deceleration in these rapidly changing times”.
History is a theme in his work and in what he collects. For him, connecting with the past via collectables is a type of slowing down. “Through that, you realise that you need to live intensely with people and objects that are a positive force for you.” The more items he owns, the more he thinks about death. Through his collection, he attempts to keep a grip on the time that is slowly slipping out of his hands. This is why he is always buying new things, to remove the pressure of time and to be able to enjoy his life on this planet.

The objects he surrounds himself with influence his work. If he wakes up in the morning and sees a pair of wonderful deities from Indonesia, he thinks: this is a good day to make beautiful and powerful works of art. The objects are a type of battery for him. He is very attached to a small statue of a crouching human figure originating from the Ifugao from the Philippines. The animist statue reminds him of Rodin’s The Thinker. To Folkert, it represents the universal man who is contemplating his fate. Folkert enjoys looking at objects that are animist because they connect him with something he is distanced from in his daily life: the unity between humankind and nature, objects and religion.

He really likes seeing how passionately collectors are able to talk about their art, as if it is their religion; something that gives depth and meaning to the relativity of their own existence. He also sees this with collectors of his own work.

He buys from online auctions, but he prefers to buy from galleries so that he can get information from the owner. Another bonus is that you can see and feel the object before you buy it. He has visited the Tribal Art Fair a couple of times and thinks it’s a great fair. It’s approachable and everyone is friendly. He also enjoys seeing who’s having a look around and which special and beautiful objects are for sale. But he struggles to look around feeling relaxed. He doesn’t see himself as a specialist. As such, he struggles a bit when it comes to estimating the financial and cultural value of an object, because he thinks he doesn’t know enough about it. That makes it uncomfortable for him to ask questions. He also says, “I’m scared that I’ll get completely carried away buying tribal art, the threshold is low and the excitement high!!