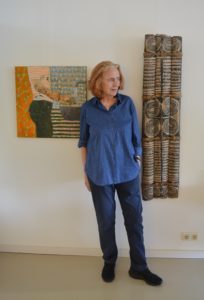 Ruscha Langelaan
I don’t feel like a collector at all, but then one day you somehow have a lot of objects!

Ruscha Langelaan is a painter, her apartment is stylishly furnished. She loves hanging objects on the wall, alongside a number of her own paintings, her walls are adorned with tribal art: kissi pennies – traditional money from Sierra Leone, a staff from Ethiopia and an Asmat sculpture. In addition, she has a display cabinet containing a number of smaller objects. Tjuringas from Australia can be found on a bookcase in the middle of the room.
Ruscha actually came into contact with tribal arts by chance. About twenty years ago, she was cycling over the Spiegelgracht when she met fellow artist Ronald Noorman. He was about to visit a gallery showing tribal art and asked if she would like to join him. She was immediately impressed, but she was also convinced that she couldn’t afford it and it was way too expensive for her. When she saw her colleague Ronald buying objects, Ruscha thought: if he can do that, so can I. Her first purchase was a Wunda shield from Australia. In the years that followed, she often turned to Ronald for advice about purchases.
She once read somewhere that you should never buy everything from one dealer, so she visits various galleries. She also looks at online auction houses, such as Christie’s and Sotheby’s, and marvels at the extortionate items that are auctioned there.

At the moment, her good friend Gerard van den Heuvel is her main adviser. He knows a great deal about tribal arts. He was guest curator for two exhibitions in the Afrika Museum in Berg-en-Dal and worked on the important Ubangi project there. Recently, he helped Ruscha with the purchase of an Arawe shield from New Britain. She had seen it online on the Lempertz auction site in Brussels and fell in love with it immediately. He not only gave her more information about these shields, but also advised her about how to bid. It was really exciting because it’s not something she does very often. Ruscha keeps a folder containing information about the use and origin of each of the objects she purchases and the invoice. Information about the origin and authenticity of an object is very important to her. She is very pleased that she has all the information in one place, because it provides a good overview of the objects she’s bought over the years.

Each year, she tries to visit the Parcours des Mondes in Paris. She used to enjoy going there with her husband Ed de Moor and whenever they went inside a gallery together, people would assume that he was the collector. He would then steer them towards Ruscha with the words “ma femme, ma femme”. She finds it strange that this world is still very much a man’s world.
She’s never really looking for objects, but is sometimes overwhelmed by something she comes across. “Suddenly you really want to have it, then something funny happens to you.” She recently bought a Boiken sculpture from Papua New Guinea, which she saw on the website of a dealer from the United States and she was surprised that it was suddenly for sale. In order to get her hands on it, she had to act quickly and wasn’t able to deliberate. She’s still thrilled with this quick purchase, especially considering she never usually buys anything impulsively; she always makes well-considered purchases. She doesn’t struggle with the enormous greed that some collectors have either. She doesn’t feel like a collector at all, “but then one day you somehow have a lot of objects!”

Whenever the Tribal Art Fair is on, she always visits a few times, and she really enjoys attending the readings. Her advice to new collectors is to look a lot, but above all to talk about the objects. There’s so much that it’s difficult to know where to begin. And talking about it is both fun and educational.