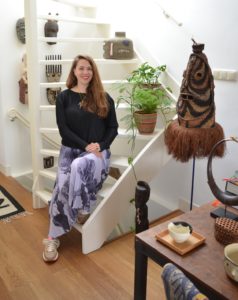 Amanda Pinatih
I collect whatever I fall in love with

When you step inside Amanda Pinatih’s house, you are greeted by four African masks hanging at the top of the stairs. Wonderful fabrics from Indonesia are draped over the chairs at the dining table and a fox observes you from a chair in the corner. The whole house is full of stuffed animals, contemporary design and ethnography.
Amanda loves travelling. Last year she went to Indonesia. As part of this trip, she visited family in Bali. She bought fabric in Sumba, Rote and Timor and enjoyed visiting the many galleries in Yogyakarta. The age of an object isn’t important to her; it’s all about whether the object appeals to her. After purchasing an object, she looks online or, preferably, in books, to find out the story behind her purchase.

In 2016, she investigated, together with her partner Jorge Mañes Rubio, whether there was interest in opening a design museum in Dharavi, a district of Mumbai. Dharavi is a so-called homegrown neighbourhood, developed by the residents themselves with little or no help from the official authorities. The district already had schools, police stations and hospitals, but didn’t have a museum. It was the perfect place to rediscover the role of a museum and the museum was intended to really put the district on the map and shine a different light on Dharavi. In the end, work on a mobile museum was carried out, together with the community, for a year. In Design Museum Dharavi, objects made by local craftsmen were not only exhibited, but also used, for example during a cricket tournament.

Soon, she will start her doctoral research. She wants to examine how Indonesian objects in Dutch ethnographic museums can play a meaningful role for people with ancestors for whom these objects were important. Amanda explains: “We should be able to reactivate these objects by talking about them, feeling them and seeing how they were made. As such, new relationships between our communities can come about, whereby the objects serve as a way of constructing and expressing cultural identity”.

Amanda works for Crafts Council Nederland, a platform that focuses on contemporary crafts. They organise masterclasses and exhibitions, there’s a programme for young people and the best masters and specialised museums are presented online. She notes that Dutch designers are also interested in and gain inspiration from materials and techniques from craftsmen from Africa, Oceania and Asia.

Amanda is 31 and sees that her contemporaries have little interest in ethnographic objects. Of course, it is a certain aesthetic that you need to like. She has noticed that certain hip shops are selling objects such as shells and necklaces from Papua. It is apparently unimportant that these aren’t real and don’t look the same as the traditional objects. The same way that the story behind the object is irrelevant to the purchaser; she finds this a shame. Furthermore, the trend among today’s young people is to have as few possessions as possible, the so-called nomadic house. Although this generation travels a lot and easily relocates to other countries, there seems to be little interest in objects from other cultures. She brings something back with her from every trip, such as a modern earthenware pot from Crete or small wooden figurines from Korea. She collects whatever she falls in love with.

She also enjoys visiting galleries where, unfortunately, she isn’t always given a warm welcome. That’s why she also enjoys visiting the Tribal Art Fair, where it’s easy to strike up a conversation with the gallery owners. Together, the gallery owners have so much knowledge, which they like to share. She wonders what will happen in the future; will her generation take over the baton?