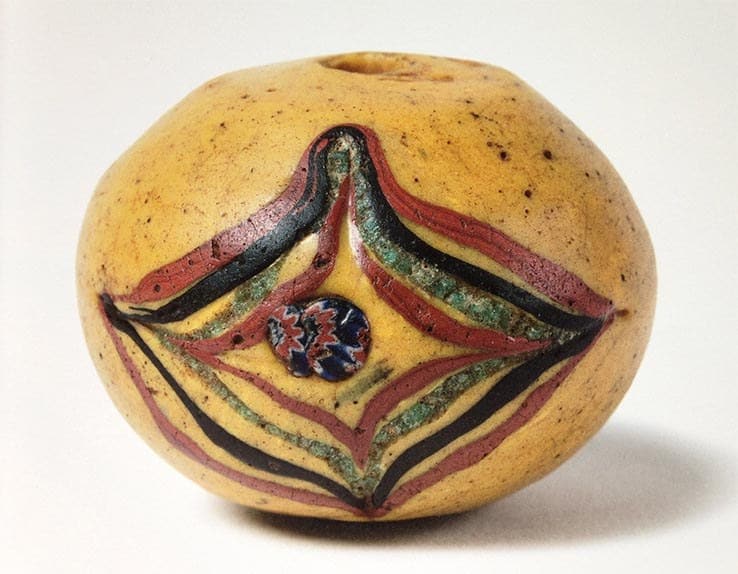 From the mid-19th century through the early-20th century a corpus of glass beads was manufactured, and possibly made for the use of elite persons in Ghana, West Africa. The beads were manufactured exploiting a technique that is called powderglass beadmaking, and is considered to be “primitive” in relation to conventional glassworking. It appears there may have been two industries, having produced beads that were similar, but not actually the same. The group that is more well-known and esteemed has been popularly called Bodom (pronounced “bah-DAHM”)—though this is not a correct name. The Krobos in up-country Ghana believe they were the makers of this primary group. The other beads, named for those that are large in size and have a specific pattern type are called akoso—this meaning “crossed lines.” The Krobo do not take credit for akoso and similar beads—so their origin is considered to be unknown.

These beads have attracted the attention of foreign researchers and collectors since the 1960s. A number of expositions have speculated about their nature and possible history. Our book provides a view into the most-excellent private collection of this corpus of powderglass beads outside of Africa, and presents a new paradigm related to how they may have been manufactured, and how they compare to other beads of ongoing powderglass manufacture among Krobo people.
Wild Beads of Africa: Old Powderglass Beads from the Collection of Billy Steinberg, 2019 by Jamey Allen (Author), Billy Steinberg (Editor)
https://www.wildbeadsofafrica.com/